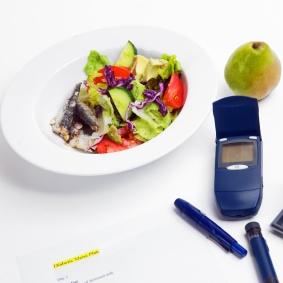 Does it feel like your belly is a magnet for fat? If you tend to be more of an apple than a pear shape, statistics indicate you may be more at risk for type 2 diabetes. Sometimes called “adult-onset diabetes,” this serious metabolic disturbance is no longer confined to people over the age of 40. Although it was formerly considered a rare disorder, type 2 diabetes has doubled in the past decade and is now being diagnosed in children and adolescents as well as adults.

According to the American Diabetes Association, more than 25 million adults and children in the US currently have diabetes. A staggering 79 million have pre-diabetes, which means blood glucose levels are higher than normal but not yet high enough to be diagnosed as full-blown diabetes. Because symptoms may go unnoticed, more than half of type 2 diabetics aren't even aware that they have the condition. It's no wonder health officials are calling diabetes an epidemic.

Ironically, the low-fat, high-carbohydrate way of eating that has been widely promoted as the ideal diet for weight loss and disease prevention is largely responsible for fueling this epidemic. It's true that excess weight is a risk factor for diabetes, and the rising incidence of diabetes closely parallels the expanding waistlines of Americans. But contrary to conventional thinking, increased girth and excess pounds appear to be a direct result of consuming a low-fat, high-carbohydrate diet.

While excess weight is an undeniable risk factor for diabetes, an equally significant factor appears to be a constant deluge of high-carb foods, even seemingly healthful carbohydrates like whole grains and fruits. When coupled with a low-fat diet, excessive carbohydrate intake wreaks havoc with the body's ability to manage blood glucose levels. Eventually, the body becomes unable to properly regulate glucose, and diabetes is the result.

The key to preventing diabetes-and managing the condition, if you've already been diagnosed-is to eat the kinds of foods that help keep your blood glucose stable and to implement the lifestyle changes that will support the intricate balance of hormones involved in energy metabolism. For the vast majority of people, type 2 diabetes can be prevented, and the course of the disease can be reversed. Even if you've suffered from diabetes for years, by following the healing program outlined here, you can help prevent the degenerative damage that all too often accompanies diabetes.

I have been concerned recently with the way we physicians make a diagnosis of insulin resistance: we're late. We wait to make the diagnosis until it's “definite”, but by then it's also advanced and more difficult to reverse.

Magnesium is a chemical element that chemists refer to by the symbol Mg, but Mg never exists by itself anywhere on the planet. It is embedded in rocks, or molten in earth, or dissolved in seawater.

Magnesium is essential to life, found in every living cell and involved in every physiological process we rely on to live. Our energy currency is called ATP, and magnesium is essential for its production and utilization. Magnesium plays a vital role in the contraction and relaxation of muscles, including skeletal muscles, as well as the of the gastrointestinal tract, and muscles regulating blood flow, blood pressure and breathing passages. Our heart is a muscle, and regulation of the electrical and muscular function of the heart depends on magnesium. Optimal mental and emotional function require adequate magnesium for neurotransmitter and hormone production.

Type 2 diabetes is epidemic, both in the United States and around the world. Although common in the obese population, we are seeing a new and troublesome trend of diabetes and pre-diabetes in normal weight people, and they share the same risk of complications that obese diabetics have.

Tweet
DEBORAH'S BLOG
How do YOU make changes?
I recently had a conversation with a fellow member of our local Rowing Club, I'll call her Wanda. Wanda has recently transformed her exercise habits, quite dramatically [read more]
Health & Wellness News
How's your health span?
You’ve probably heard alarm that our US life expectancy has gone down during the pandemic (and actually a bit before that as well), but I would suggest that one reason [read more]