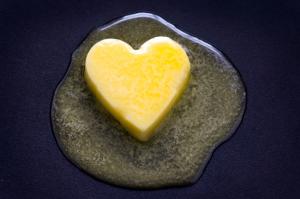 I know many of you have shared a history with me: quietly enjoying our butter even during the height of the margarine celebration in the saturated-fat-phobic 1990’s and early 2000’s. As is always the case, the paradigm began shifting from the outside. The Weston A. Price Foundation was founded in 1999 and embraced the principles of traditional eating, including many ways to savor butter and other saturated fat. Gary Taubes released his still-best-selling Good Calories Bad Calories in which he suggested that the culprit in our fattening diet (circa 1970 onward) has been the bread, even the whole wheat bread and not the butter. Eyebrows shot through the roof, and the American Journal of Clinical Nutrition  published a meta-analysis AGREEing that the finger-pointing should stay on breads and cookies when it comes to the blame for heart disease. Specifically, the saturated fat of red meat and butter could not be seen to be at blame. Time Magazine came full circle, from its unhappy face of bacon and eggs in 1984 to a well-loved curl of butter celebrated on the 2014 cover.

Two recent articles appeared again looking at saturated fat and heart disease. In 2016 in the British Medical Journal, some prominent docs, including cardiologist Dr. Aseem Malhotra said we just have to stop thinking that saturated fat “clogs up” our arteries as if they were an obstructed pipe in your kitchen.

Again in the BMJ, Zoe Harcombe writes this year to correct some misunderstandings. While dairy and red meat contain saturated fat, most dietary saturated fat comes from processed foods: meaning the fat has been altered, so the processed foods are akin to the hazardous toast on which the butter has been blamed.

Dietary bottom line: Eat real food, not processed food, fearing not any food in its natural form, including red meat and butter. Cook at home and avoid processed food, which is likely more problematic from its carbohydrate content than its fats. (And Dr. Weston A Price would tell us that the damage to the fats in the processed foods is likely one of the worst culprits.)

Another Battleground for Butter

This one is almost too silly to report but it’s true, so: a normally esteemed journal, Brain, Behavior and Immunity, has published a study in which poor adult coping skills were blamed on adolescent diets … high in saturated fat! The silver lining is that there have been more people debunking the study than those repeating its findings.

Thankfully, the brilliant Dr. Georgia Ede in her Psychology Today column picks the study apart for us. The research subjects were rats and the harmful diet contained more saturated fat, more monounsaturated fat, more calories, and more than 17 times the amount of sugar as the routine diet. “Hmm, which component should we blame?”

Please enjoy your red meat, butter, and eggs knowing that they are better for your heart than the toast you can just as easily skip.

Related Articles:
Your Heart is Fine With Butter
News on Saturated Fat, Two for One
DEBORAH'S BLOG
TMI about the vagina?

Your Heart is Fine With Butter
I was recently on a “Preventing Diabetes and Obesity” panel with a local cardiologist. I asked him what he thought about all the recent review studies clearing saturated fat of any association with heart disease. His response was, “Well, a little... [read more]
News on Saturated Fat, Two for One
Perhaps it’s not so newsworthy each time a practicing physician sees the light about saturated fat. It’s happened to many physicians, even cardiologists. But it becomes news when a leading medical journal highlights an article exonerating saturated... [read more]