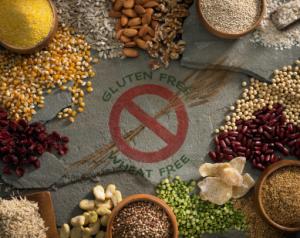 Not surprisingly, gluten comes from the Latin word for glue. Wonderful qualities of elasticity and buoyancy derive from gluten's self-adherent stickiness.

Gluten has attracted modern attention because of adverse reactions to gluten in foods. While few people (perhaps 1% in the US) have true celiac disease - an auto-immune reaction to the gliadin component of glutenous foods - some degree of non-specific gluten sensitivity might affect somewhere between 5 and 10% of Americans. The incidence of gluten sensitivity has risen in the last 50 years, coinciding with an agricultural preference for higher gluten content in flour, and thus better baking performance. Because eating more of a food doesn't necessarily cause adverse reactions, some people theorize that gluten is a little bit hard on everyone's gut. If you have a chronic health problem, and you suspect gluten even though a blood test may not show celiac disease, it is worth the effort to go gluten free for 3 to 6 months to see if there is a difference in how you feel.

Avoid gluten-containing grains and flours. Grains may be prepared directly, ground into flours, or malted for beer making. Avoid all preparations of these grains, and avoid them as ingredients in other foods.

Note: Although soy beans contain no gluten, some common soy foods contain gluten (such as miso and tamari), but there are often gluten free alternatives, such as wheat-free Tamari.

Questionable:
Oats have been implicated in gluten sensitivities for two reasons. Oats contain a protein which is in the same family as glutens and perhaps cause cross-reactivity in some people. Additionally, if oats are processed in a facility that also process glutinous grains, contamination can lead to an apparent oat reaction. Oats from Ireland, Scotland, and parts of Scandinavia, where less wheat is grown, are less likely to be contaminated and more likely to be a safe part of a gluten-free diet.

*It is not uncommon for people who are sensitive to gluten to react adversely to millet, likely because it has proteins similar to the gluten found in wheat.

A good practice for many reasons, shopping the perimeter of your grocery store to find whole foods direct from nature, unboxed and uncanned, is your best precautionary plan when you're avoiding gluten in your diet.

I was surprised to learn from a patient that she was offered a gluten-free menu by the motel where she stayed while ferrying her grandchildren to Disneyland. With a high sensitivity to gluten, she was delighted and was safely able to relax her guard. She has shared the experience of many people with known gluten sensitivities: many supposedly gluten-free packaged foods have hidden gluten. A very small amount can cause relapse of symptoms in sensitive individuals.

I had my own personal experience with gluten sensitivity this year (2012), a sensitivity far short of a true allergy, but nonetheless convincing. I developed a bumpy, bubbly, itchy rash. I thought it was a heat rash, but it persisted for several months despite the rising and falling of our spring's thermometer. I discontinued the new raw milk source for two weeks with no change in the rash. I looked at the rash at some point and realized I would have said to a patient, "That looks like dermatitis herpetiformis and I think you should go off of gluten." I don't eat any gluten, but I do drink it, in the form of a beer several times a week. I switched to a gluten free beer (happily, Omission, a new beer on the market is actually very good) and the rash was gone within four days. Most dermatitis herpetiformis cases take months to resolve, but I believe my sensitivity is mild, and was perhaps triggered by another factor. I get a few bumps if I drink a regular beer more than twice a week, so something is persisting. Now if someone would only invent a carbohydrate free beer that was as good as my new gluten-free beer.

Related Articles:
Allergy Relief with a Food Elimination Diet
Hay Fever/Allergic Rhinitis/Seasonal Allergies
The Paleo Diet
DEBORAH'S BLOG
How do YOU make changes?
I recently had a conversation with a fellow member of our local Rowing Club, I'll call her Wanda. Wanda has recently transformed her exercise habits, quite dramatically [read more]
Health & Wellness News
How's your health span?
You’ve probably heard alarm that our US life expectancy has gone down during the pandemic (and actually a bit before that as well), but I would suggest that one reason [read more]

Allergy Relief with a Food Elimination Diet
Testing for food allergies is controversial. Conventional and integrative physicians line up on opposite sides of blood testing, skin testing, and the ultimate issue of whether food allergies are a serious problem or not. However, any physician who... [read more]
Hay Fever/Allergic Rhinitis/Seasonal Allergies
The Paleo Diet
The Paleo Diet has been inspired by the study of our own human history. The Paleolithic Period began about 2.6 million years ago with the first use of stone tools by pre-historic humans and ended about 10,000 years ago. In the Paleolithic Period,... [read more]