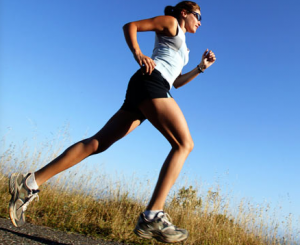 Low carb ketosis for athletes? The long-awaited study by Dr. Jeff Volek and team has been released. They studied endurance athletes; endurance is a term that could apply to events as short as rowing a 1K (3-5 minutes) to a 26-mile running marathon. ("Endurance" performance doesn't apply to quick bursts of energy, lasting less than a minute.)
The researchers compared athletes who routinely follow a low carbohydrate diet (<20% calories from carbs and >60% from fats) with a high carb group (those who take in > 55% of their calories from carbohydrates).
Every person, every athlete, has certain energy stores, consisting of stored sugars (glycogen) and stored fat. Well-trained athletes can store up to 2-3000 calories as glycogen, which we use for many purposes, including a demanding athletic task. Most of us store quite a bit less than that, 1500-2000 calories perhaps. When we exert ourselves (athletics or just life!) we burn those stored calories first, for many reasons. When they start to run out, it would serve us well to be able to switch to burning fat as a fuel.
"Fat oxidation" is the scientific term for burning fat as a fuel. If you routinely eat a low carb diet, you have some ability to do this, whereas if you eat a high sugar diet, need to eat frequently, and suffer from hypoglycemic "crashes," it's likely that you are not very efficient at fat oxidation. You could certainly do it if forced to (if trapped on a desert island without food), but you wouldn't easily slide into it if you went on a long hike and forgot to bring food. You'd be weaker after the first couple hours, your sugar stores expired.
What Volek discovered, comparing the two groups of athletes, was rather remarkable. First, the athletes showed almost identical skill at both burning and then replenishing glycogen stores. Good to know: even if you don't eat a lot of carbs, your body knows what to do with them. Secondly, and this part is truly remarkable: the low carb athletes were able to oxidize fats, burn them as fuel, markedly better than the high carb athletes. More than twice as well at their peak exertion, and at submaximal exercise, 59% more than the high carb athletes. Any endurance athlete would want that kind of ability, unless they enjoy having to re-fuel every 90 minutes during their event. Even low carb athletes refuel during long events, but they have a now-documented advantage through a great deal more metabolic flexibility!
I'd like to hook non-athletes up to some of this equipment and see how some of "just plain folks" compare at fat oxidation, low vs. high carbers!
Related Articles:
A Ketogenic Diet, the Short Version
Low Carb Diet Recommended for ________________
Reaping the Rewards of Low Carb Eating
Successfully Following a Low Carb Eating Plan
DEBORAH'S BLOG
The Trees in the Forest

A Ketogenic Diet, the Short Version
A ketogenic diet is one that encourages your body to rely less on sugar-based fuels and rather to turn to fat and ketones (produced in the liver by metabolizing fat) for fuel.
Low Carb Diet Recommended for ________________
Yes, it’s come to that: every day brings  a news story about a condition for which a low-carbohydrate diet is the most healthy diet to follow.
Reaping the Rewards of Low Carb Eating
Some people understand how a low carb-eating plan can help them lose weight, balance their hormones, and reduce inflammation, and  are easily able to make an instant change. However, other folks encounter obstacles with this process.My patient Jean... [read more]
Successfully Following a Low Carb Eating Plan
Success at following a low carbohydrates life style comes most readily with a few cautionary suggestions.Foods to EnjoyYour choice of foods is always the first place to start. Which low carb foods do you most prefer - eggs, meat, cheese, shellfish... [read more]