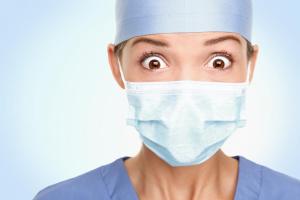 At the risk of plagiarizing my good friend Dr. Georgia Ede, the only life-shortening aspect of Low Carb is reading drivel from the recently published Lancet study and slamming my head so hard with my hand that I sustain a concussion.

To be serious and respectful, however, in a recently published study in the Lancet, researchers found, from an observational study, spanning 25 years and relying entirely on dietary questionnaires (red flag, red flag, red FLAG!) that those in a certain dietary category died sooner, from any cause. The participants were middle aged, 45-64, and their health statistics tracked for a LONG time. They divvied the participants into three categories of carb consumption which they called low-, moderate- and high-carb consumers. The moderate group survived better than the other two, generating many claims, such as this article in Science Daily News, that pasta has been redeemed, and we're better off eating carbs "in moderation" rather than subjecting ourselves to an early death with a low carb diet.

Here is the simplest of the problems: to qualify as low carb, they just had to eat less than 40% of their calories from carbs. So on a 2000 calories a day routine, they had to eat less than 800 calories of carbs. That's 200 grams of carbs or what I would consider a WEEKLY allowance for someone aspiring to a low-carb routine. (These are standard numbers for someone 175 lbs or so. For someone smaller, simply reduce by 1/4 all those numbers and the same still holds!)

For reversal of diabetes, obesity, hypertension and metabolic syndrome, I encourage people to experiment with 50 grams, 30 grams and 20 grams of carbs, and see how they feel, and how their body responds.

If I wanted to CAUSE diabetes, obesity, hypertension and metabolic syndrome, I would encourage people to eat 200 grams of carbs, in a diet with adequate protein and fat, what one might consider an "all things in moderation" diet.