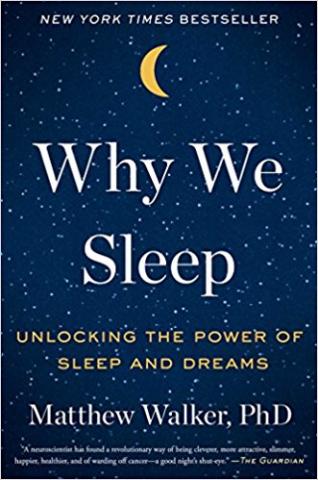 My current fave new book is Why We Sleep by Matthew Walker, PhD. “Unlocking the power of sleep and dreams” is the subtitle of the book and it does all that and more!

Dr. Walker is a prolific sleep researcher, publishing numerous reports from work done at my first alma mater, University of California at Berkeley. (Yay, team!) With precision sufficient for the scientists and clarity far beyond that of typical science writing, Walker entertains and enlightens on the rewards of good sleep as well the hazards of less than optimal sleep.

I doubt that any reader of this review still believes the (bad) joking remark, “I’m too busy to sleep: I’ll sleep when I’m dead.” Simply put, if you believe that, you’ll sleep sooner than you’d like to, because you’ll die before your time. Sleeping less than six hours a night is directly correlated with not only death from all causes, but death from specific causes as well: cardiovascular disease, cancer, mental illness, diabetes and violence. The violence part is particularly chilling: did you know that driving sleepy  is far more hazardous than driving drunk? I was stunned: when you’re drunk, your reflexes are slowed; when you’re sleepy, you can fall instantaneously asleep and drive right into opposing traffic without knowing it. Think of that, too, if you’re ever a patient in a teaching hospital: before a resident doctor offers you any services, you might do well to ask how much sleep they’ve had in the last 24 hours. You’d hate for your surgeon to fall asleep into your operation.

And before sleep loss kills you, you’re likely to be: obese, diabetic, depressed, frequently ill, and a lousy athlete. Professional athletes who routinely lose sleep sustain far more injuries and—do you think it’s related?—have shorter professional careers than athletes who treasure their pillow time. If those pitfalls, don’t alarm you, how about this one: not only are you less interested in sex and less able to reproduce, you’re actually…well: unattractive when you’re sleep deprived. (I see that in myself, but didn’t know anyone had studied it!)

Here’s the obesity graph. Admittedly it’s only a correlation, not necessarily causative, but telling in two ways. 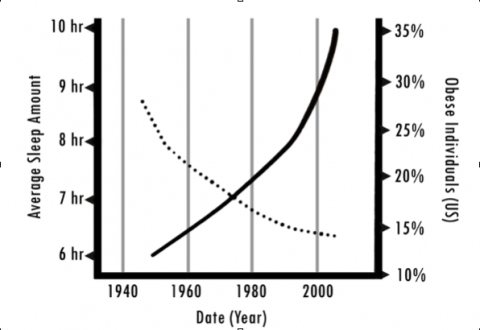 First, look how much less we sleep, on average, than our parents did! Secondly, pretty impressive “inverse correlation,” even it doesn’t prove cause. As we’ve slept less, we could generate similar graphs for type 2 diabetes that mirror this one for obesity. It’s also no secret that after a bad night of sleep, we make poorer choices, starting with an extra morning donut and possibly ending in a disagreement or altercation or serious mistake later in the day.

Sleep and the Aging Brain

My two biggest areas of interest in this book were his discussions of sleep’s effect on cognition and sleep’s changes as we age: they’re related. Obviously we don’t think as well after a poor night of sleep, but even a seemingly good but short night of sleep drains the brain. Turns out we make memories, retain memories, and decide what we can forget to make room for more, only when we get sufficient deep sleep and particularly the sleep that happens after six hours of sleep, lasting til we wake at dawn. (It really is healthier to keep farmers’ hours but not everyone can do that; notoriously teens are physiologically more suited to be night owls than morning larks. Let’s start schools later!)

And sadly, it turns out that as we age, a significant portion of us lose the ability to stay asleep with noise and to enter deep sleep for a significant portion of the night. Little brain wave static pulses called “sleep spindles” stand guard over our sleep, keeping us from waking to the ambient noise in the world around us. Old folks have less sleep spindles. So our sleep cycles are shorter and more erratic, and we spend less time in that memory enriching time of sleep. The likely culprit is lower levels of the neurotransmitter GABA, in shorter supply as we age, and in some folks due to their genetics, and in most if not all patients with Alzheimer’s.

What can we do about it?

(Dr. Walker and I heartily agree on what NOT to do about it: don't take anti-histamines, don't take sleeping pills!!)

The next three suggestions come from yours truly!

What IS right for you, if you like a good storyteller and you’re fascinated with just how much has been learned about sleep, is this book. (What I want to know is how on earth did they do MRI’s on people while they were asleep??!!) Sleep research, sleep patterns and sleep “lore” is all fascinating and Walker is an excellent choice to spin a great yarn about sleep. One caveat, don’t read it before bed, because it will entertain you enough to keep you awake. Read something boring before bed, not Why We Sleep!

http://www.amazon.com/dp/1501144316/?tag=drdemd-20
DEBORAH'S BLOG
How do YOU make changes?
I recently had a conversation with a fellow member of our local Rowing Club, I'll call her Wanda. Wanda has recently transformed her exercise habits, quite dramatically [read more]
Health & Wellness News
How's your health span?
You’ve probably heard alarm that our US life expectancy has gone down during the pandemic (and actually a bit before that as well), but I would suggest that one reason [read more]