Fluoride: Cavity Prevention or Poison from Your Tap? 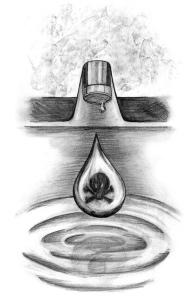 Most of us were brought up believing that fluoride is a magic bullet guaranteed to prevent cavities. Toothpaste and water supplies containing fluoride were considered a good thing. Today, many of us who have explored these faith claims have discovered exactly the opposite is true: dosing municipal water supplies with fluoride─a corrosive industrial waste acid─is not the best way to prevent dental caries, it also poses serious threats to human health, and ironically, can cause damage to children's teeth.

Unlike medications that require informed consent before they're consumed, our daily dose of fluoride is received without benefit of information and warnings.

First, a Little History About Fluoride
Following the discovery that populations where fluoride occurred naturally in the water suffered from fewer cavities, the professional dental community began lobbying for its inclusion in water supplies during the 1940s. Unfortunately, this promotion was based on bad science and illogical assumptions.

Fluoride applied topically has been shown to have some benefit in the prevention of dental cavities, and indeed the optimal use of fluoride is indeed to apply it topically in toothpastes or dental applications.

Topical benefit is a far cry from justification for introducing fluoride into the water supply. It also turns out that ingesting fluoride on a systemic level carries profound health risks. Further, the substances used to fluoridate water artificially are chemically distant from the compounds that occur in naturally fluoridated water. These industrial chemicals—fluorosilicic acid, sodium silicofluoride, and sodium fluoride—used to dose municipal water are byproducts created in the manufacturing of phosphate-based fertilizers. As industrial byproducts, they are considered hazardous and would add expense if treated as garbage. Switching their description from hazardous garbage to water treatment chemicals has proven an economic boon to manufacturers. Fluorosilicic acid—the most commonly added form of fluoride—when combined with chlorinated compounds is so corrosive it can leach the lead out of plumbing fixtures!

Who's Crazy Here?
In the past, public health officials and dental practitioners wrote off fluoridation opponents as a crackpot fringe group. Today, that's no longer the case. With a growing body of evidence establishing the very real risks and harm caused by water fluoridation, even former fluoride proponents are reversing themselves. Read the labels on mouthwashes and toothpaste with fluoride and you'll find warnings that they should not be swallowed.

The logic of dosing water with fluoride, even it were a safe substance, is patently absurd. Doing so is akin to say, adding sunscreen chemicals to public water, irrespective of people's needs and exposure to solar radiation. When realizing that most publicly provided water is used in manufacturing, agriculture, bathing, and landscaping irrigation, the irrationality of fluoridating the water supply is highlighted even further.

Fluoride: Poison from Your Faucet
While many public systems add chemicals to sanitize and deodorize water, fluoride is the only substance that's added in the guise of a medication. While communities in the U.S. and Canada have continued to add fluoride to their water for decades, many western European nations have concluded that the compulsory medication of water is neither sound from a health nor a civil liberties standpoint. Anyone who feels the need for treating teeth with fluoride can do so easily through the purchase of toothpastes and mouthwashes that contain the chemical.

Even here in the U.S., public and professional health organizations have grown concerned over the proliferation of ingested fluoride. The American Dental Association now warns parents not to give babies fluoridated water. The National Research Council has determined that the systemic intake of fluoride can reduce bone strength, act as an endocrine disruptor affecting thyroid gland function, and cause brain damage. A recent Harvard University study has suggested a disturbing connection between osteosarcoma, a particularly serious form of bone cancer and fluoride intake. People with kidney disease are especially susceptible, since they can't effectively excrete fluoride. Use of fluoridated toothpastes has even been linked with acne-like skin eruptions around the mouth which promptly disappear when use of the products is stopped.

Fluoride: Hype vs. Reality
The most rabid supporters of water fluoridation are now reining in their enthusiasm in the face of numerous studies worldwide demonstrating its benefit to teeth has been overstated. Data gathered by the World Health Organization indicate that tooth decay rates in non-fluoridating western European nations have declined as much and even more so than in other developed countries where fluoridation has persisted.

The U.S. Centers for Disease Control now acknowledge that any potential benefits of fluoride are "posteruptive and topical," meaning that unless fluoride is applied directly to teeth that have emerged, there is no therapeutic benefit.

We're all at risk for fluoride poisoning today given its proliferation in our food supply. Soft drinks and other beverages produced with fluoridated water are particular culprits. Crylote, a popular pesticide in California's vineyards, is laden with fluoride. Drinking a single glass of wine made from grapes treated with Crylolite is the equivalent of quaffing a liter of fluoridated water.

In the realm of fluoride debate, I am actually a moderate. Rabid opponents avoid the use of any fluoride. I see the benefit of topical fluoride (applied in toothpaste once you’re old enough to spit it out.) I am horrified by its use in water for two reasons: the use of industrial waste products for fluoridation, and the inclusion of a chemical treatment in our water supply. Fluoride is in many food products, and the potential for overdosing seems an obvious hazard.

The real question arises as to why well-meaning dentists do not agree with me. Fluoride opponents claim those dentists fail to address the true dental problem, which is inadequate dental care for low income people. I think it’s more likely that the fluoride debate hasn’t been properly aired in the US. When it started, it was espoused by a fringe group, the John Birch Society, who suspected a plot to undermine health. My suspicions point more toward commercial collusion, because introducing fluoride in water benefits the manufacturers who would otherwise have to dispose of that particular form of fluoride as a toxic waste product. True, it’s a toxic waste product. Was it a federal plot? Actually, that’s irrelevant to the modern discussion.

In my mind, the bottom line is that if fluoride really works topically, let’s work to get it topically (and optionally) applied, rather than dosing it internally without an opt out possibility.

Related Article:
Chlorine in Our Water
Water and Water Filters
Household Chemicals: Strangers in Your Home
DEBORAH'S BLOG
How do YOU make changes?
I recently had a conversation with a fellow member of our local Rowing Club, I'll call her Wanda. Wanda has recently transformed her exercise habits, quite dramatically [read more]
Health & Wellness News
How's your health span?
You’ve probably heard alarm that our US life expectancy has gone down during the pandemic (and actually a bit before that as well), but I would suggest that one reason [read more]

Chlorine in Our Water
You know you should be drinking eight glasses of water a day, but what kind? Chlorine is by far the most widely used solution for removing bacteria and viruses from municipal water supplies. Your tap water may not be as innocuous as you think it is... [read more]
Water and Water Filters
Water may be the most underrated and least understood substance in the universe. Water is the most abundant element on earth and inside our bodies, yet it is also one of the most mysterious.Every activity within the body occurs in a water-based... [read more]
Household Chemicals: Strangers in Your Home
It is sobering to consider that there are some 85,000 chemicals in circulation today. It is even more alarming to realize that less than 20 percent of chemicals commonly found in products used in homes every day have never been assessed for safety.