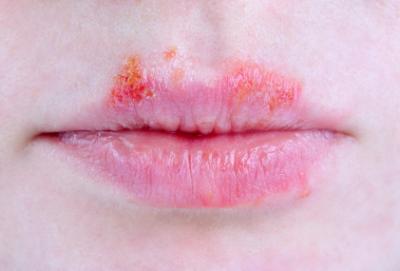 Type 1 herpes apparently happens to almost everyone when they're young. You or may or may not remember an episode of one or more painful herpes blisters around your mouth or sores on your gums. The episode lasts seven to ten days, and if you are lucky, may then be gone for good.

If you are not so lucky, though, you may recall that telltale tingle on your lip when the herpes sores reappear. If you're going on vacation, you worry if the sun will bring on a lesion, or if pulling an all-nighter will show itself on your face in the following days. You don't know if you hate the herpes outbreak more for the pain or the ugliness!

What Is Known About Herpes Simplex Type 1

The herpes virus comes in many forms and the type that usually causes sores in and around the mouth is called HSV-1, or herpes simplex virus type 1.

The initial herpes exposure may be asymptomatic and precede the eruption by months to years. The herpes virus has the unfortunate capacity to live dormant in our system and reappear when it gets a chance as an oral, facial, or genital cold sore. Herpes outbreaks almost always recur in the same location for a given individual.

It has long been thought that oral and facial herpes lesions are caused by type 1 herpes (HSV-1) and genital lesions by type 2 (HSV-2). We now know both types of herpes can visit both areas of the body.

The severity of herpes eruptions varies tremendously among individuals and often represents a relative weakness of the immune system in the face of an emerging expression of the virus. Alternative treatments, such as those recommended at DrDeborahMD, are aimed at enhancing the immune response rather than disabling the viral expression, and are similar for either type of herpes virus, in any location on the body.

For the greatest herpes improvement with the fewest steps, do the following:

A comprehensive program involves many areas in which action steps can be taken, gradually or all at once. Start by following our basic nutrition and healthy lifestyle guidelines, with the following modifications:

Note: Coconut is controversial. The helpful extract Monolaurin in coconut oil might act in opposition to the arginine-rich coconut meat. Coconut milk might be made from either meat or oil. If coconut is important to your diet, test it on yourself to see its personal effect on your tendency to herpes.

The following can be helpful in shortening an acute herpes attack, or interrupting a pattern of recurring attacks.

Notes on contagion: open herpes sores are contagious. That same area is likely to be contagious before there are open sores, perhaps even as early as when there is just “tingling.”

Many natural applications may shorten a herpes attack:

As a chronic condition, herpes is best treated with a constitutional remedy in consultation with a professional homeopath.

Avoid contact with active herpes lesions on others. Avoiding contact with the skin or membranes at or around the herpes outbreak area is the only sure protection.

Keeping a strong immune system is an excellent protection against a herpes recurrence. Many exposures do not result in an outbreak, if your immune system is strong and is able to keep an upper hand with the herpes virus.

Adam came to see me years ago for a constitutional homeopathic remedy, one of his complaints being recurring herpes sores around his nose and mouth. We talked about many things and I gave him an individualized constitutional homeopathic remedy and passed on the tip to keep lysine handy. As an avid skier, the winter was his worst time for herpes. Luckily we met in the early summer and I was confident that by the next fall the remedy would result in little or no herpes sores.

Close but not completely right: he still got little tiny scabs that never blistered and healed quickly. By the second winter, he was clear of cold sores completely! When ski season starts, he will still come by and get a dose of his remedy, and he uses lysine as a regular vitamin during winter months. He is now happily free of herpes cold sores.

Related Articles:
BioImmersion Original Synbiotic Formula
Is sugar addictive?
Solutions for Herpes Simplex Type 2
It’s flu season and I don’t want to get sick. What do I do?
DEBORAH'S BLOG
How do YOU make changes?
I recently had a conversation with a fellow member of our local Rowing Club, I'll call her Wanda. Wanda has recently transformed her exercise habits, quite dramatically [read more]
Health & Wellness News
How's your health span?
You’ve probably heard alarm that our US life expectancy has gone down during the pandemic (and actually a bit before that as well), but I would suggest that one reason [read more]

BioImmersion Original Synbiotic Formula
More than a probiotic! Yes, we love our bugs! Friends, television ads, and even your physician have probably told you that probiotics are part of a healthy life. “Probiotics” is a fancy name for the friendly germs that live on our skin and in... [read more]
Is sugar addictive?
Dr. Robert Lustig from the University of California, San Francisco (my alma mater!) is gaining notoriety this week for calling attention to the serious health hazards of sugar. The most accessible read is in the online version of The Atlantic.
Solutions for Herpes Simplex Type 2
It’s flu season and I don’t want to get sick. What do I do?
No secret: people are sick more often with colds and flu during the winter. Possible reasons include loss of sunlight enriched vitamin D levels, exposure to cold and damp, indoor air quality, and greater indoor crowding. Most of these conditions... [read more]