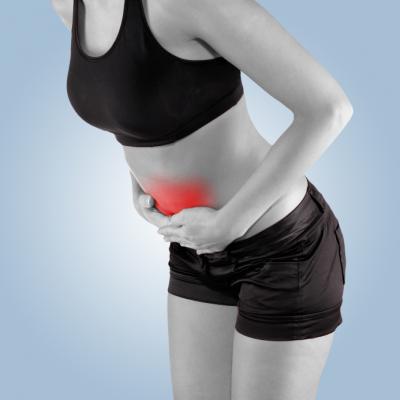 “I swear I look pregnant after I eat!” If this has happened to you,  you know the rest of the lament. You eat a little food, sometimes even just have a drink of water and your upper abdomen swells without limit. You might burp or experience heartburn, or you might just feel as if your abdominal wall is about to burst. “If only I were a cow and could regurgitate this cud!”

And then, if only that big bloat would pass, but it doesn’t easily do that: it just sits there and everything else seems stuck as well, nothing seems to move.

Or when it finally starts moving, it takes off with at its heels and clears out everything in its path: you’re lucky if you make it to the toilet on time.

This all started ever since you took those antibiotics, or perhaps that over-the-counter medication for reflux. Maybe it was after a bout of food poisoning. You remember that you had grown intolerant to dairy, perhaps to other foods, right before this started being so troublesome. Maybe you have no idea when it started, it has just seemed to increase over the years.

Formerly thought to be a rare occurrence, we now know that it is much more common than previously thought and likely to be an essential component of many cases of irritable bowel syndrome, as well as a many contributor to diseases as far-ranging as fibromyalgia, chronic fatigue syndrome and depression. Let’s delve into the details.

Bacteria normally live throughout our gastrointestinal tract, with predictable colonies in each region of our intestine. The small intestinal bacteria are normally at low levels (less than 100,000/mL) but well proportioned in terms of different species. They are kept in control by healthy (acidic) secretions from the stomach and the propulsive (downward) impulses of the electrical waves of peristalsis known as the migrating muscle complexes (MMC's) which sweep through the small intestine every 90-120 minutes during fasting, moving along indigestible substances and turning around any upwards traveling bacteria that actually belong in the large intestine.

When any one of the three components (normal flora, stomach secretions or MMC function) of a healthy small bowel is disrupted, it can lead to overgrowth of normal bacteria, not well tolerated at that location by our small caliber digestive tube. The excessive bacteria digest food at a premature location, causing the gasses of fermentation to arise and distend in the upper abdomen from which there is no easy egress.

While it is the most personally distressing, the painful distension of SIBO is probably the most benign of many problematic consequences. The misplaced bacterial colonies disrupt the normal mucosal surface of the small bowel, causing inflammation and increased intestinal permeability (“leaky gut”). The bacteria actually compete with our own absorptive mechanisms and can starve us out of vital nutrients. The overgrowth can lead to diarrhea, constipation or an alternating challenge of both.

The bacteria may interfere with fat digestion by breaking up or de-conjugating bile: if you have trouble digesting fats, and can’t imagine why that gall bladder of yours isn’t serving you better, it might be SIBO.

The far-reaching effects of SIBO mean that almost any body system can weakness, pain or outright auto-immune illness, any of which might be caused by the SIBO and might be ameliorated by resolving it.

The specific risk factors for SIBO are numerous and start with the simple process of aging. As we get older, we make less stomach acid and our MMC’s slow down a bit. It is estimated that rates of SIBO get as high as 15-50% in the elderly, as evidenced by studies such as this one  and studies referenced in this article.

Besides advancing age, other conditions which raise the risk of developing SIBO include

Testing for SIBO is an area of some controversy. While the previously considered gold standard test has been to take a sample from your small intestine and “see what grows,” opinion is shifting to favor a test you can do at home. A readily available breath test instructs you to avoid certain foods and treatments for a period before the test which you take first thing in the morning. You simply breathe into a little container, swallow a small amount of lactulose or glucose, and collect additional breath samples over the next two to three hours. The lab analyzes those samples for the presence of hydrogen gas and/or methane gas and calibrates the amount of those gasses present. (A lab that just tests for hydrogen is not worth doing.) A significant increase in exhaled hydrogen or methane is clearly a positive test. A high baseline (before the sugar sample swallowed) can also be considered a positive test, particularly if it stays high and constipation is part of the picture.

The two laboratories offering home-testing kits are Genova Diagnostics and the SIBO Center for Digestive Health at the National College for Natural Medicine. They both offer the kits only to health care providers.

Treatment options are several, but the truth of all of them is that reversing SIBO is usually a long-term commitment. It is the rare person who takes one course of “the SIBO antibiotic,” does nothing else, and enjoys resolution of their symptoms. SIBO management is unique in the medical world: the two leading physicians who are setting the standard for treatment are Dr. Alison Sibecker, a naturopathic physician from Portland, Oregon, and Dr. Mark Pimentel, a medical doctor, from Los Angeles, California. Each has valuable points of view and they have spoken at conferences together (!!) on the topic.

Something to understand about SIBO:  SIBO is a little like pregnancy. You usually don't have just a little SIBO, it’s either present or it’s not. Generally, it won’t come and go on its own. Once you really have it, it usually requires a concentrated and lengthy dose of attention to resolve the problem.

Treating the bacterial overgrowth. Starting with the bugs themselves, you can starve the bugs with one of two dietary or nutritional treatment protocols:

OR you can try to actually kill the bugs with either herbs or antibiotics.

Although I am generally loathe to use antibiotics because of their far-reaching systemic effects, Rifaximin has the unique advantage of being bile-activated, according to Dr. Pimentel, which means it only works in the small intestine, and becomes inactive and harmless once it arrives in the small intestine where a healthy collection of germs serves us well. Neomycin (in short term doses) also seems to act in a more local way, whereas Metronidazole is known to have more systemic and adverse effects.

A question exists as to whether the restricted diet and the drugs can be used simultaneously. Double whammy, starve and kill them? or, per Dr. Pimentel here https://chriskresser.com/sibo-update-an-interview-with-dr-mark-pimentel/ , perhaps we should feed them with all the bad foods, make them happy, and thereby even hungrier for the antibiotics they are also consuming.

Treating the motility disorder. It is important to realize that killing bacteria does not treat the cause of SIBO, only the opportunistic critters. After your best effort to eradicate the critters, SIBO will only be completely eliminated if the motility problem is minimized and reversed for some variable time period: six months to one year seems to be common, and will reduce the chances of relapse.

Options for enhancing motility include:

Healing the intestines after SIBO also requires some concerted effort. Remember that the out-of-place organisms themselves cause actual damage to the lining of the intestine, damage that results in “leaky gut” (incompletely digested food particles passing through to the blood stream and causing food allergies) as well as impaired micro-nutrient absorption (deficiencies of iron, calcium, B12, and zinc). If any of these conditions are present, you will want to heal the lining of your intestine.

I used several terms in this health topic that aren't fully explained, so let me say a bit about them here:

*SCD or Specific Carbohydrate Diet is a restrictive diet created by Sidney Haas and popularized and expanded by Elaine Gottschall, in the interest of treating her son. The SCD has had remarkable success in controlling the symptoms associated with inflammatory bowel disease and other disorders of digestion. You can learn more about this diet here.

*FODMAP's are a category of foods consisting of short chain carbohydrates and sugar alcohols that are a challenge to digest, some people always or gradually losing that ability as they age. The specifics of this diet are laid out by Stanford Hospital in this handout.

The big question for me as I write this article though is "Can someone do this on her own, without working with a health care practitioner?" And the answer is probably not. Although you can imagine you have SIBO, you can't be tested definitively without a provider. If you are sure, you could try the treatment yourself. It's hard to stay focused on the multiple components of SIBO treatment, and to stay the course, without a good partner in the process. There is also a real value to the prescribed treatments, both antibiotic and pro-motility, listed above. So particulary for SIBO, I do recommend working with a trusted health care practitioner. When that is impossible, it is certainly true that the dietary treatments, both herbicidal and pro-motility, work well for some people.

To anyone who thinks he or she might have SIBO: good luck to you, there is hope, yes your symptoms can be resolved!

Solutions for Irritable Bowel Syndrome
Solutions for Acute Indigestion
Solutions for Diabetes Type 2
The Three Dirtiest Drugs
… and Their Better SubstitutesWhen applied to bombs, the adjective “dirty” implies the presence of radioactive material in addition to conventional explosives, the radioactivity serving to contaminate the area of the bomb, making it inhospitable to... [read more]