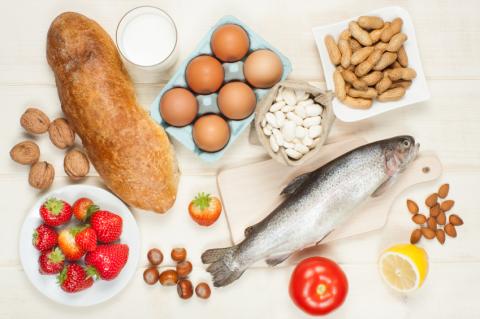 When I hear the term “arachidonic acid” I must admit that I have always thought of spiders. My mind quickly corrects itself, and I remember that arachidonic acid is a polyunsaturated fatty acid, an omega-6 fatty acid, one that we require for its various functions in the brain, muscles, and liver, primarily for the pliable nature of our cell walls and for important signaling to modulate inflammation. But I also know it’s maligned in many viewpoints, so I was eager to hear it all laid out and clarified by Chris Masterjohn.

At the Weston A. Price Foundation annual conference in Anaheim last weekend (November 13, 2015), Masterjohn discussed the role of arachidonic acid in promoting health. He spoke of chronic inflammation and its specific manifestation as food intolerance or food allergies. He asked us to reflect on our own observations on the increasing frequency of food allergies, and I will add the official statistics: they’re increasing by leaps and bounds! Or, more specifically, quite significantly, increasing 18% among children from 1997 to 2007 to a totally of 3 million US kids with significant food allergies at the end of that decade.  Four out of every 100 children have a food allergy. He suggested that if we understand the process of inflammation, we have the tools to create food tolerances if we choose our foods wisely.

The photo above depicts the most common food allergens (and the foods eliminated on the auto-immune paleo diet) are grains (especially wheat and corn), legumes (especially soy), dairy, eggs, seafood (especially shellfish), nuts and peanuts, citrus, nightshade vegetables, and strawberries.

The difference in gluten sensitivity has been well studied: blood from 50 years ago shows that we had 25% as much reactivity to gluten then as we do now. And that’s just the most basic of blood screening.

Masterjohn notes that our dietary intake of both arachidonic acid (in the liver and muscles of animals, especially the fatty cuts) and vitamin A (in all those yolks thrown out for egg white omelets) have declined dramatically in the same period of time. Turns out we actually need both of those to have a healthy relationship with the food we eat, as I’ll get to in a moment. Eating a lot less of them might have been okay: we can convert linoleic acid from seed oils (more widely eaten over that time) if we have plenty of other co-factors (calcium, magnesium, zinc, protein, to name a few) and aren’t hampered by insulin resistance, diabetes, excessive polyunsaturated fats or sugar. With all those conditions requisite for conversion of linoleic acid, it is obviously easier to just eat the arachidonic acid than to produce it. And as you know, we haven’t eaten as many egg yolks, nor as much fatty meat or liver, as we once did, as our parents did.

Many conventional nutritional viewpoints consider arachidonic acid as a bad fat, calling it out as the one that initiates the process of inflammation. How often have we heard “Inflammation is the basis of all deadly chronic diseases”?

Masterjohn compared inflammation to human firepower or emergency responders: in the right amounts and at the right time, both are highly desirable. Yay for 911 responders and the help they provide. However, inflammation that doesn’t stop and police that take over way after the emergency is gone (“police state” doesn’t have a pleasant ring to it) are both unwelcome and deadly.  Optimal health is not a passive lack of inflammation but rather includes inflammation that is balanced, well-timed, and lasts an appropriately useful amount of time. (That might be almost a direct quote.)

We learned about the paradoxical value of inflammation when we saw the deadly effects of some of the anti-inflammatories we considered routine drugs. Many of our “cox-2 inhibitors” (over the counter anti-inflammatories) are also associated with an increased risk of heart disease. Vioxx was the favorite in the early 1980’s and it was great at relieving pain. Vioxx soon had to be recalled as it greatly increased the rate of deadly heart attacks and strokes. The same prostaglandin (prostacyclin) that causes pain and inflammation also relaxes blood vessels and de-glues stuck together platelets.  The deadly effect surpassed by far the pain-relieving benefit.

The cox-2 enzymes inhibited by anti-inflammatories are also key players in maintaining the health of our gastrointestinal tract, especially its immune system. Ahah: something perhaps to do with food intolerances.

The cox-2 enzymes produce prostaglandins that not only initiate inflammation but that also resolve inflammation in a timely fashion. Here’s the rub with interfering with their work:  when you take an anti-inflammatory such as ibuprofen or naproxen or even acetaminophen, the drug blocks inflammation with moderate effectiveness. However, the drugs happen to be champs at blocking the prostaglandin’s second job of inflammation resolution. So if you strain your back and take an ibuprofen, it won’t hurt quite as bad, but it may hurt for a lot longer than if you let nature take its course. Natural inflammation is self-limiting.

Another function of prostaglandins is the regulation of tight junctions, both in the skin and in the gut. Tight junctions are the boundaries between the cells and they prevent leaks. Leaky skin doesn’t hold in moisture, becomes dry and flaky, with dandruff and eczema. Leaky guts let whole food proteins into the blood stream directly and our healthy immune system responds with an allergic reaction, hence food allergies.

A healthy intestinal barrier is created and maintained by prostaglandins promoted by the vitamin A and arachidonic acid in our diets. Foods such as egg yolks, liver, and cod liver oil serve the purpose of “chaperoning” foods in our gut and allowing a tolerable amount of interaction with our blood stream and the creation of an immune system tolerant of non-hazardous foods.

But what about omega 3 fatty acids aren’t they considered anti-inflammatory? Well, yes, they promote less inflammation than arachidonic acid, but don’t resolve inflammation quite as well.

Masterjohn concluded that it’s best for us to get all of these inflammation-related fatty acids from our diet, arachidonic acid and the omega-3’s EPA and DHA. He cautioned against taking a high dose of oils as supplements, noting that WAPF adherents have erred on the side of excessive doses of cod liver oil (some claim that WAPF encouraged the high doses), and Paleo folks have swallowed excessively high doses of fish oils for omega 3’s. So it’s also not surprising that folks so careful and caring about their food might have more food intolerances: if we’ve ingested too much cod liver oil OR too much fish oil, we’ve interfered with our Cox-2 enzymes’ normal function, normal production of prostaglandins, which are much wiser than we are at timing and regulating our inflammation.

Great lecture, and in line with my principles about looking for these fatty acids in our foods. Our diets should contain adequate levels of omega 3’s (wild caught fish) and certain omega 6’s (arachidonic acid, conjugated linoleic acid, from pasture raised meats) with certain cautions. Fish can raise mercury levels in some people (silver fillings?) and perhaps fish oil is safer for those folks. (I recommend Barleans’ delicious key lime flavored fish oil!) Cod liver oil with naturally present vitamins A and D can be useful particularly for preventing or resolving acute illness. (I recommend Extra Virgin Cod Liver Oil.) ONE teaspoon should be your maximal dose of either one of these oils. Take extra vitamin D if needed, and eat your fatty meat, egg yolks, and liver. (Yes, if you don’t like liver, you can take it in a pill!)

Related Articles:
Allergy Relief with a Food Elimination Diet
Reduce Your Child's Risk of Allergies
Exercise Away Inflammation
DEBORAH'S BLOG
How do YOU make changes?
I recently had a conversation with a fellow member of our local Rowing Club, I'll call her Wanda. Wanda has recently transformed her exercise habits, quite dramatically [read more]
Health & Wellness News
How's your health span?
You’ve probably heard alarm that our US life expectancy has gone down during the pandemic (and actually a bit before that as well), but I would suggest that one reason [read more]

Allergy Relief with a Food Elimination Diet
Testing for food allergies is controversial. Conventional and integrative physicians line up on opposite sides of blood testing, skin testing, and the ultimate issue of whether food allergies are a serious problem or not. However, any physician who... [read more]
Reduce Your Child's Risk of Allergies
If you have followed recent statistics on childhood health, you know that children are showing an alarming increase in allergies and eczema. The allergies range from life-threatening food allergies to simple respiratory allergies, sometimes... [read more]
Exercise Away Inflammation
Admittedly this sounds like a cheesy sci-fi term, but it’s your inflammasome that you can alter with diet or exercise, and thereby reduce inflammation in your body overall. Since inflammation is associated or known to be causal with almost any... [read more]