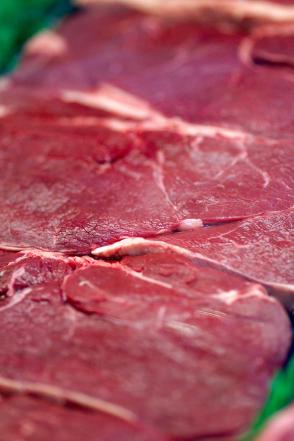 Everyone's talking about it: red meat is bad for you! So says a study out of the Harvard School of Public Health published in the Archives of Internal Medicine. Does that change anything I believe about what's good for us to eat?

Sorry, but Harvard only did half its job. The study wisely separated out processed meat and then declined to distinguish between damaged beef and real beef. I would wager anything that most of the beef consumed was damaged beef, which I would avoid and counsel you to avoid, too.

What's the difference? Two big differences in how cows are raised determine whether they yield real beef or damaged beef, what they eat and how they live.

What they eat: Cows are meant to eat grass. Everything about their nature from physiology to temperament to evolutionary history puts grass on their plate and nothing else. Although many cows are raised on grass for significant portions of their lives, virtually all conventionally purchased beef is finished for one to 6 months or more on grain. Imagine yourself eating something you were never meant to eat, let's say deep fried potato sticks, high fructose corn syrup and white flour, with a little damaged beef thrown in. Eat nothing but that for months at a time and you would fatten up just like a cow, your muscles “tenderizing” as they marble with unhealthy fats.

Morgan Spurlock documented the damage done in his movie Supersize Me, with his health taking an amazing hit in just thirty days. That wasn't an appropriate diet for a human, and grains are not appropriate diets for cows.

How they live: Cows are meant to forage in open fields. Cows with grain-bloated bellies are confined to animal feed lots. They stumble and crowd knee deep in their own excrement, far from a grassy field. Hormones and antibiotics course through their system: does anyone imagine they don't penetrate the meat?

Amazingly, the “scientists” didn't even have a clue about this, which makes me think their ivory tower exists far from the current market place. While it may still be a niche market, the market is growing and there are plenty of consumers who appreciate the taste, the higher Omega 3's and the conjugated linoleic acid (CLA) of grass-fed beef.

So I agree with Harvard, don't eat damaged meat! And I invite Harvard to do a new study where they compare the health effects of eating real or damaged meat.

For a statistical critique of the Harvard Study, see Denise Minger's column on Mark's Daily Apple.

Related Articles:
Ideal Diet
The Candida Diet
Live and Learn and Lose It!
What is TMAO Anyway?
DEBORAH'S BLOG
TMI about the vagina?

Ideal Diet
I'll start right off with admitting that it's a little naive to imagine that there is a single "Ideal Diet" that works for everyone. From decades of clinical practice, individual variability is the principle of reality that is most often confirmed... [read more]
The Candida Diet
While Candida albicans—a type of yeast species—is normally found in our digestive tract and on our skin, it can easily grow out of control when fueled by a combination of dietary and lifestyle factors. Millions of people suffer from the effects of... [read more]
Live and Learn and Lose It!
The second session of my class on losing it (weight, inches or inflammation - or all three!) is underway, and for those who didn't make it into the class, I want to talk about the main focus of the class: reducing carbohydrate intake. “Low carb” is... [read more]
What is TMAO Anyway?
Twice over the last month, articles in the general media have reported that the link has been found between certain foods (red meat and eggs) and heart disease, as if that causation is known and undisputed. The real “behind the headlines” story is... [read more]