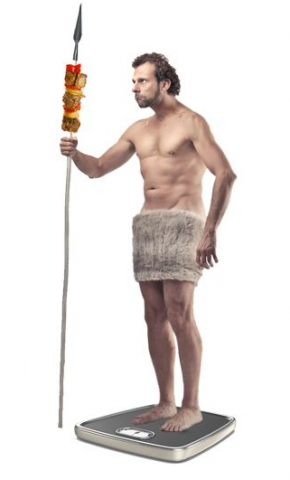 Decades ago, my eccentric Uncle (J Ward) produced several notable cartoon programs, starting with Crusader Rabbit, moving on to Rocky and Bullwinkle, Fractured Flickers – you get the idea. His idea was to produce cartoon shows that adults could watch with kids, each person laughing at different parts of the gags. He had a big Hollywood opening for all his productions, including Jayne Mansfield unveiling the Rocky and Bullwinkle statue on Sunset Blvd. His first cartoons were mocked, eyebrows were raised, and journalistic jabs flew at him fast and furious. He’d just chuckle and say, “That’s fine, keep it coming. Just spell my name right.” (Spelled correctly, his first name was J, not Jay.) He knew that ridiculous jabs were dying efforts at opposition, most ridiculous just before conversion to his point of view.

All I can say is that at least Mother Jones spelled Paleo correctly when they titled Michael Pollan’s recent interview with MJ, although that’s about all they did right .  The article reviews an interview in which Pollan critiques what he calls Paleo. Beyond the spelling, Pollan and MJ did not get much right about Paleo or make much sense in the analysis.

Pollan scornfully dismisses any notion that we even know what the original Paleo diet was: "Most people who tell you with great confidence that this is what our ancestors ate—I think they're kind of blowing smoke." Evidently Pollan has spent no time studying the work of Loren Cordain, Boyd Eaton, Staffan Lindeberg, Weston Price, and others, all of whom catalogued and described the diverse diets of hunter-gatherer populations from the distant past as well as those co-existing with us in the modern era. Pollan’s statement just makes him look uninformed, although it will unfortunately hold some sway with folks who like him and are uninformed themselves.

As eager as if he thought he discovered the moon, Pollan informs us that the meat we eat today isn’t the same as the meat eaten by our caveman ancestors - imagine that! Acknowledging that grass-fed meat comes closer to the ideal of wild meat, he continues in perfect harmony with many a Paleo author discussing what’s best to eat.  “So, basically, enjoy meat in moderation, and choose pastured meat if possible.”   It’s hard to say if it’s Pollan or Mother Jones who is promoting the misconception that Pollan’s recommendation is anything other than a central principle of most Paleo diets.

In one paragraph he celebrates bread, and in the next breath he encourages us to eat more microbes, eat a mixture of cooked and raw food, and above all cook our own meals. The only item on his list that is in conflict with Paleo is a soft conflict: he says bread “can” be part of a health diet, for those who don’t suffer from celiac. I’m going to give him the benefit of the doubt and assume he knows what now seems general knowledge: gluten sensitivity is a wider net than celiac, so there are many non-celiacs who do better without bread as well. So he’s not pushing bread, he’s pushing pastured meat, fermented foods and other probiotics, and freshly prepared, home-cooked food.

That sounds like a Paleo-friendly diet to me. Thanks, MJ, for spelling Paleo correctly.

I was in my third year of medical school, spending some time at the Women's Health Clinic on lower University Avenue in Berkeley, California, across the Bay from my [read more]
Health & Wellness News
How's your health span?
You’ve probably heard alarm that our US life expectancy has gone down during the pandemic (and actually a bit before that as well), but I would suggest that one reason [read more]

The Paleo Diet
The Paleo Diet has been inspired by the study of our own human history. The Paleolithic Period began about 2.6 million years ago with the first use of stone tools by pre-historic humans and ended about 10,000 years ago. In the Paleolithic Period,... [read more]
Weston Price – The Charles Darwin of Nutrition
One of the fastest growing nutritional organizations and websites is the Weston Price Foundation, named for Dr. Weston A. Price, a Cleveland dentist who traveled the world in the 1920s, looking for the healthiest people on earth. What does modern... [read more]