Once Again For Organic Food 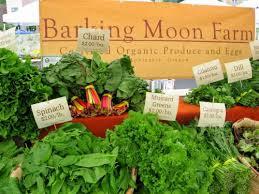 As a clinician I know that common sense is an incredibly reliable tool: it’s most likely that the patient returned from a back-packing trip has abdominal pain and diarrhea because of some exposure from the trip. As a clinical I also know that science has its place: when the physical exam doesn’t quite fit the expected “common sense” picture, that patient has to go to the lab for blood tests, stool culture and maybe an x-ray or other imaging test.

So it is with organic food: doesn’t it just make sense to you that farmers who are able to grow a successful harvest without pesticides (that eradicate the competition in the fields) have produced heartier and more nutritious food? Organic farmers have to pay greater attention to soil health, plant vigor and non-toxic ways to deal with pests and weeds.

The science, however, has not always supported the common sense superiority of organic foods. The most recent study is described in this New York Times article is the most comprehensive since a 2009 study by the London School of Hygiene - that study found there to be no nutritional differences between conventional and organic. (Check out the article – I love the photo of the farmworker strolling through the aisles of the greenhouse lettuce in Connecticut….wearing a cowboy hat!) The current study found several differences which qualify as “nutritional”, starting with the observation that organic produce contained 17% more anti-oxidants overall, with some particular compounds being quite a bit higher. Anti-oxidants are believed to be helpful in general health, particularly the immune response and in avoiding high levels of inflammation.

There are more nutrients in an organic peach than a conventionally raised one.

Both the 2009 and the recent study agreed that organic produce contains less pesticide residue, although they disagreed about its significance. Pesticide residue is generally considered toxic in a dose-dependent fashion. A very tiny amount is clearly safe, a high dose is clearly hazardous, but it is very unclear where to draw the line between the two.

In Times article, Dr. Marion Nestle adds the third important consideration, which is that less pesticide use is better not just for the consumer but for the environment. And, I would add, for the farm-workers and other folks along the line working with the produce.

Growing an organic peach is better for the planet!

An issue not mentioned, but relevant when one is considering our food supply is the contentious debate around genetically modified foods. GMO defenders point out that nothing hazardous has happened with the consumption of GMO food, but I consider that point, frankly, irrelevant. First I would prefer that Monsanto and others had run significant safety studies (they haven’t) on GMO consumption, rather than presuming them to be safe until one of us suffers. Secondly, even if GMO food itself is benign, I am aware of two other significant problems with GMO food production.

GMO foods are sprayed liberally with pesticides whose glyphosate residues have been found in soil, water, breast milk and blood samples. Glyphosate has certainly not been proven safe to human health.

We have lost a tremendous amount of crop diversity, to our nutritional detriment. It is said that primitive people, living in a geographically prescribed area, consumed a greater variety of plant species than we do now, shopping in supermarkets that collect delicacies from all over the world.

I realize not everyone can afford to buy only organic food on a regular basis. I also know that US citizens have been deluded about the true costs of food by focused crop subsidies over the last 40 years that have made corn, wheat, and sugar incredibly cheap. It’s hard to prioritize family expenses, but there are many ways to reduce costs and still buy organic when it really counts. Buying directly from the farm, or through Community Supported Agriculture, can reduce costs significantly. Smart kitchen management can minimize food spoilage. It’s estimated that 40 percent of our food supply is thrown away every year because it either spoils or merely “outdates.”

When you decide your household priorities, you might find it handy to consult two lists compiled annually by the Environmental Working Group: The Dirty Dozen (now called the Dirty Dozen Plus) and the Clean Fifteen.

I would add that buying locally grown food of all sorts, sometimes from organic farmers who are not “certified organic”, is your best choice, both for your own nutritional health and for the impact of your purchases on the planet!

Can Organic Foods Feed the Future?
Organic farming is the only way to undo the frightening loss of precious topsoil, large-scale environmental pollution, and an ailing society of chemically contaminated people with which the past 70 years of farming in America have left us. The only... [read more]
Organic Farming and Organic Eating
Organic farming embraces the concepts of respect for the soil and the environment, nutrient-dense produce, balance, biodiversity, and quality of life for livestock. Organic farming assumes that if the soil is healthy, then the plants it produces... [read more]