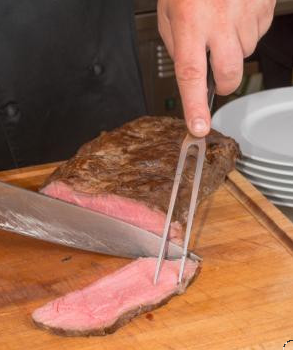 A recent article in the British Medical Journal is gathering public attention. The easiest article to access appears on the Huffington Post and is quite sane in both title and content: “Red Meat Possibly Linked to Breast Cancer.”

The possibility of a connection between red meat and breast cancer has been scrutinized repeatedly over the last two decades, probably in an effort to give women more control over a disease that so often seems to strike without reason. For instance, although there is indeed a hereditary component to breast cancer, most women diagnosed have no family history of the disease.

Back to red meat. Before we consider a connection between a food and a health condition, let’s think about where we might find information to help us understand the situation. What about a clinical trial? Cancer takes too long in humans so a clinical trial that provides a definitive answer will never occur. Lacking clinical trials, we can consider two other sources of information: observational data and historical data, both of which concern the behavior in populations rather than individuals.

The current article concerns observational data, intending to ferret out any possible association between red meat consumed in younger women and subsequent development of breast cancer. (Before we go any further: how many times last week did you have red meat? Last month? Over the last year?) Almost 100,000 women were surveyed as to the frequency with which they ate a wide variety of foods and alcohol, including red meat, repeating the questionnaire in 1991 and every 4 years thereafter until 2007. Additionally, in 1998 the women were asked to complete a similar questionnaire for food they ate from 1960 to 1980 during the time period they were in high school!

So your first response is probably: that can’t be very reliable, can it? I, too, must force myself to read the rest of the article when I consider that this is the “data” on which the study’s conclusions are based. And indeed, it is typically not thought to be an accurate way to evaluate food choices, but it’s the best we have when we study populations. In fact, from the cohort of 100,000 women studied, they selected 173 individual women and made an honest attempt to evaluate the accuracy of the food recall questionnaire: it appeared to be mostly (not entirely) more than half accurate.

Women’s meat intake was stratified from low consumption (0.2 daily servings) to high (1.6 daily servings), and the only other differences among these women was a tendency in the meat loving women to be heavier, eat almost 50% more calories overall and to be smokers. The study “controlled” for those differences – that is, tried to eliminate those clear risk factors as contributing to the final analysis.

Women who ate more poultry and fish showed lesser rates of breast cancer than the standard rate of 1 in 8. Eggs as well were associated with reduced risk, also legumes and nuts. Interestingly, across all classes of protein: the more protein you ate, the greater the association with breast cancer. The researchers hypothetically imagined meat-eaters subbing in legumes for meat and found their risk reduced.

Does this study suggest women should eat less meat? Not at all, because of two aspects of the study. First the dietary recall is admittedly about half-way accurate: no way to base a lifestyle change. Secondly, an association is only something that should be used as a basis for a clinical trial, and never for an outright recommendation. All the researchers can say (and all the reporters should say) is, “Hmm, interesting, how shall we test to see if this is at all true?”

Before we leave this topic for good, I’d like to say something about historical data, with gratitude to Nina Teicholz for her recent brilliant work, The Big FAT Surprise, which is why we have butter on the cover of TIME magazine currently. (Yes, red meat and butter are good for you, eat them!)

Despite the misleading graph on the NPR website which, in the middle of an article about increased beef consumption, shows us the graph for total meat consumption, showing it increasing from 10 to 50 billion pounds a year from 1909-2012. What Teicholz teases apart brilliantly in her book (on page 115) is the fact that from 1950-2000 the increase in poultry is dramatic! Red meat is cherished until about 1980, when it subsides again, never reaching the high rates of consumption enjoyed in 1800, when chickens were too valuable to eat: everyone wanted the eggs! From 1900-2000, red meat took a little blip up and then declined again to 1900 levels by the end of the century.

Meanwhile, you ask, what “associated” trends can we observe in breast cancer incidence? I don’t need to tell you. Since 1950’s the overall trend of breast cancer incidence has been rising gradually upward, rising 1% a year from 1950-1975, continuing to rise rapidly until the last few years. Breast cancer increase fairly well parallels a decrease in our red meat consumption, looking at the US as a whole.

Does that mean we should all eat more red meat? Not based on an association, of course, so you’ll have to look at other information to decide about red meat.

If you have read many other articles on this site, you’ll know that I do recommend people eat red meat – based on a wide variety of health considerations – and that the red meat they choose should definitely be pasture-raised (grass-fed) and organic if possible.

What about you, what are your thoughts on red meat?

Have you been checking in with old friends?  New friends? Even just your “regular friends” whom now you haven’t seen for the last month?  I delight in knowing that—to [read more]
Health & Wellness News
Helping a Sugar Resistant Brain

Breast Cancer Prevention Enhanced
Scientific studies have identified various ways in which cruciferous vegetables reduce the risk of breast cancer. Polish women who continue to eat cabbage more than three times a week after moving to the US, for instance, maintain a low risk... [read more]
Preventing Breast Cancer
Reducing Breast Cancer Risk
Did you know that more than 200,000 women in the US are newly diagnosed with breast cancer each year?  We have long known that physical activity decreases breast cancer risk and that excess weight increases the risk, but recent research has... [read more]