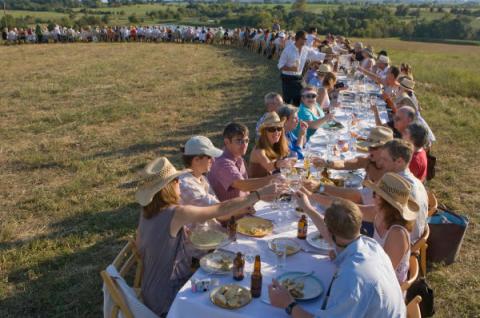 Some time ago, I posted a blog titled simply "Trouble In Paradise." Now I sadly must add a Part Two to what I hope will be a very limited series of articles.

The current dilemma started entirely within the Weston A. Price Foundation and features two of its star members and contributors. The drama started behind the scenes when Daniels, also known as the Naughty Nutritionist, always a featured speaker at the annual conferences and recently co-author with Sally Fallon of Nourishing Broth, expressed concerns about the quality and reliability of a favored WAPF product, specifically the fermented cod liver oil made by Green Pastures, a key WAPF sponsor. The WAPF Board was satisfied with the existing research on the product, and Daniels was left to her own devices and her own wallet to pursue an analysis with which she was satisfied. Several months and thousands of dollars later, she published a scathing report, titled Hook, Line, and Sinker. You can download that report here for free, as well as read a bit of the give and take that has followed.

By her research, she felt confident to conclude that some bottles of the product were highly rancid. (You may have noticed remarks elsewhere on my website that rancid fish oil is generally thought to be worse than no fish oil at all.) Beyond the rancidity, the oil appears to be from pollock which is technically a relative or family member of cod, but commercially considered distinct. The product seems to lack some or all of the vitamins considered essential and to contain as an unwelcome bonus certain trans fats, which should not arise naturally from anything other than (contaminant?) vegetable oils.

Whew, what a litany of problems with a product that has been considered valuable and pure by many consumers and health care practitioners. The real question arises next: what to do with marked and strident disagreement?

I wrote to Sally Fallon and told her I was concerned, expressed my hope that the topic would be addressed, perhaps a dialogue between Daniels and Green Pastures, at the November conference. I received no reply.

I wrote to Kaayla Daniels and thanked her for her hard work, and to clarify some of the questions about her work that arose from notable nutrition experts such as Chris's Masterjohn and Kresser, and Sarah Pope. She answered me and alerted me to what eventually transpired over the last week.

Daniels was booted off the WAPF Board, scratched off the November conference schedule, and WAPF Chapter leaders were asked not to discuss the controversy in any way that could be considered critical of Green Pastures. The organization remained confident in the product quality, and assured the Chapter leaders that they needn't harbor any doubts, everything was fine.

A column in the midst of the fray raised the possibility of darker motives: could conflict of interest be swaying any of the sides of the debate?  You can read some of those concerns in Beeyoutiful's column here.

A weary and sad exchange of he-said, she-said that leaves the consumer confused and the WAPF ultimately weakened.

I don't believe the questions have been resolved. Until that time I have removed Green Pastures' products from both my inventory, both online and in my physical office. I will not sell fish oil that has some possibility of being rancid. I will keep tabs on the ongoing debate and see if it is ever resolved to the agreement of both sides. I doubt that day will come.

Meanwhile, what are YOU to do? I am slightly influenced by my own lab testing: after years of reliably taking FCLO, my omega-3 fatty acids were low and my levels of inflammation were higher than expected. I am taking omega-3 supplements, and what a treat: this one is delicious. For now, I am taking one tablespoon of Barleans Omega-3 Swirl: guess what it tastes like!  Key Lime Pie. In the winter, I may switch to a cod liver oil for the added synergy of naturally occuring vitamins A and D with the omega-3 fish oils. I will be tasting those cod liver oils at the WAPF annual conference.

I will also be considering how it tastes in a deeper part of me: how does this organization feel that has punished its whistleblower by expulsion?

Fish Omega 3's and Lower Breast Cancer Risk
An article posted online at BMJ (British Medical Journal) today reported the results of a meta-analysis involving over 800,000 participants and 20,000 breast cancer cases. What they found was that those who ate the most amount of omega 3's from... [read more]
Rancid Omega-3's More Harm Than Good
Recent surveys of fish oil capsules performed by independent laboratories have revealed a fairly significant proportion of rancidity in the products sampled. Researchers from Spain recently investigated just what would be the effect of consuming... [read more]