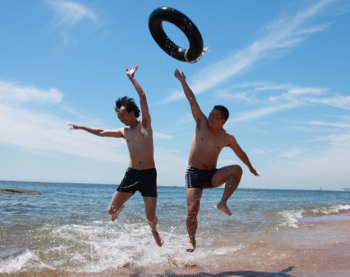 Before you decide you don't have time to read about playing (of all things!), consider that play has a powerful benefit for adults as well as children. Researchers in the mental health field have explored the area of “positive psychology”, learning from happy and vital people the secrets to their mental well-being. Something resembling play is a prominent part of happy people's lives. And if you are still wondering, happier people have 22% less risk of cardiovascular disease. Less aching of the heart, less disease of the heart, according to this research.

When was the last time you played? For many adults, we hearken back to the last competitive team sport we engaged in, but according to the research defined patterns of play, you are more likely to be playful if you're in the stands rooting for your favorite team than you are sweating out the next point or pitch. The National Institute for Play reminds us what is involved in truly playful activities.

Playing can involve physical movements (everyone can dance at least a little), building powerful mind-body connections that enhance function all around. We can play with objects, play with other people, and either way we have a degree and quality of attunement with something or someone outside ourselves that is rarely found in other forms of activity. Play can be imaginary, or dramatic as in story telling, or downright transformative when creativity is unleashed.

Trying to take my own advice to heart, I think of when I feel playful. Good intellectual discussions can share many of the aspects of play, but can become pressured and lack the spontaneity and physical movements of the games I played when I was younger that my knees may no longer tolerate. The closest I have come to playing recently would be the times I was in water: not swimming laps, just riding waves, or moving as close to fish-like as I can manage.

How do you play? Inspire me - I am looking for some new ways to introduce play back into my life!

DEBORAH'S BLOG
The Trees in the Forest